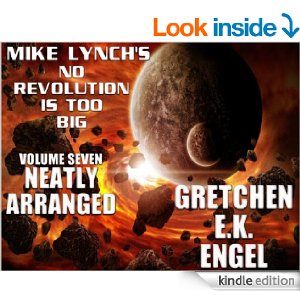 A few weeks ago, my debut story, Neatly Arranged, was published. Last week I participated in a blog hop about my writing style and mentioned that I want to write speculative fiction for those who hate it (or at least think they do). Neatly Arranged is a great sample of exactly what I mean. The No Revolution Is Too Big series created by Mike Lynch is about a shape-shifting, time traveler named Stelfson. He’s a revolution broker. That is he will start a revolution – for a price. It doesn’t get more sci-fi than that. Yet, I describe Neatly Arranged as “Downton Abbey” meets King of Torts with hover cars. Neatly Arranged is about Arianne, a corporate lawyer from a noble family whose parents are encouraging her to enter an arranged marriage to an earl. Arianne and Stelfson pair up to win a simple legal case and end up uncovering something much bigger.

While Stelfson does morph once or twice, and admits to time-traveling, it’s not to kill his grandfather or create some other conundrum but to snag a table in the VIP section of the hottest new restaurant. My writing style focuses on my belief that character is king, and if the characters are interesting and most-likely snarky, then they can do things as mundane as discuss unicorn polo and popular novels over dinner. Naturally, there’s the other camp that is fine with characters out of central casting as long as there’s suspense and action. I got that covered, too. No, there aren’t any high speed chases or kidnappings (well, not exactly since the main character is compliant), but there are nefarious villains, deception, and the morally ambiguous Stelfson.

This short and sweet post is all about promoting a great series and hopefully snagging a convert or two over to speculative fiction. If you click on the No Revolution is too big link, all nine stories come up. They all take a unique approach to Stelfson. Necessary Evil was written by one of my writing partners, TJ Akers, and is about an accountant and a computer virus of sorts. Two things people love as much as lawyers. A Sirius Revolution was written by another writing partner, Lisa Godfrees. Lisa incorporates an unusual Bible story, a classic movie, and a couple of great legends to wrap up the series with Stelfson’s back story.

If you could travel back in time, where would you go and what would you do?